In the past week we have had some interesting and sobering conversations with Ellie's doctors about her condition, her care and her short and long term prognosis. Some of the facts have been startling and some of them have been encouraging.

Whenever I get information with numbers attached I think of Twain (or is is Disraeli?): 'There are three kinds of lies: lies, damned lies, and statistics.'

Some of the statistics that we have heard in the past week:

If Ellie stayed on the traditional TPN bag as her whole source of food, there is a 75% mortality rate after 4 months. The TPN causes liver damage and there isn't anything that most hospitals can do about it except transplant three or four organs at a time. Yes, they do that.

Scary numbers to be sure and the jury is still out on what the Omegaven fish oil version of TPN does for liver function, but it was a definite eye opener for both of us. Hopefully Ellie will progress and get some enteral (real) food into her diet which will give us more time to get her eating and doing things away from TPN.

The other intersting statistic is related to the new STEP surgery which lengthens the bowels of kids with short gut which was developed and studied here at Children's:

There have been more than a dozen STEP surgeries on infants at or near Eleanor's age, including some newborns who were operated on when Ellie had her first operation at Yale.

The average patient got about 25% of their food enterally (real food) and 75% from TPN before STEP.

After the surgery the average patient needed 25% of their food from TPN and got 75% enterally after STEP.

This comes with statistical deviations, of course, but there is a good record of this sugery being 'a success' with kids in Ellie's sitaution. The other portion of the patients food would come from TPN but ideally would be reduced over time as her gut gets better adapted to doing extra work.

This has led Abby and I to revisit the fact that, although Ellie looks great to us right now, she may not make it to 2,3, or 5 years old. It is just a fact that no matter how much we fight and work to get her healthy, she may not adjust to living with a short bowel. These are facts of her situation which suck. It may be that we are wading in a wide river of Denial but Abby and I are fully aware of this and talk about it which is good. 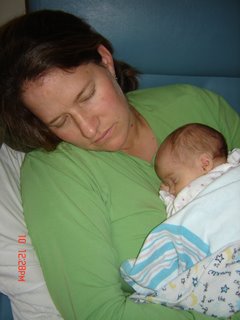 The upside of this is that we have found ourselves enjoying time with her more each every day since. Even the screaming diaper changes at 2 AM and crying at 4, 4:15, 4:30, and 4:45 AM which seem to accompany our nights in the hospital. It is dark and morbid, but thinking about her future makes us want to spend as much time as we can with her.

I swear at 4 AM the other day she looked up at me and puckered up.

For right now she is just a hair under 7 1/2 pounds (up a pound and a half since she was born a onth ago) and her bilirbin numbers (the indication of the function and health of her liver) have stabilized at 3.5. Up is bad, down is good, zero is great. we met a dad the other day who told us that his son topped out just north of 12 before getting Omegaven.

The doctors tell us not to be concerned about her progress and that she is doing just what she should be doing.

For now we wait and watch and put Ellie in her bouncy seat that I finally put together yesterday.
Posted by Gib and Abby Brogan at 12:27 PM

Well this scared the hell out of me. Then I thought about it for a moment. I was thinking of the old "the glass is half full or the glass is half empty." My mechanism is to think that the glass if half full, and that Ellie will digest her milk and over the long run be okay.

The Irish would never, ever mention the things you put here. As I read it I thought how much better this is. The truth is so important.

Keep on with the truth.

Going to the extreme, I'll call you during the game tonight. I think it's about time to think about breaking up the Gas House Sox.

You wrote nothing that you hadn't told me on the phone. To read it absolutely made me catch my breath and then I thought of the little boy who has had the surgery and is going home, drinking his bottle! I continue to be amazed at your willingness and ability to tell everything, good and bad. You and Abby are tough and so is Ellie. See you tomorrow.

We don't get to know how long our lives will be or the length of anyone elses for that matter. We just get to live with it and appreciate it each and every day. It is a pleasure and a priviledge to be able to get to know Eleanor for as many days as she will be with us.