Just trying to be a kid.

Ellie was just featured in the Boston Children's Hosptial Thriving blog.  She is just a kid trying to be a kid. 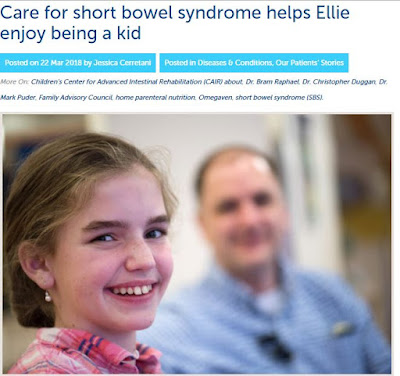 Hi, My name is Ellie and I am starting to blog for the first time :) 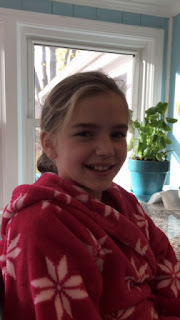 This is me.
I am 10 years old, in 5th grade and live in Massachusetts. I have a dog named Tillie and a brother named Will.
10 years ago on today my family brought me home for the first time!!!!!And my mom and dad just showed me the video of my mom moon walking out the door of Boston Children's Hospital with me for the first time. My parents can be strange!! WHO WALKS BACKWARDS OUT OF A HOSPITAL??????

I have broviac CVL  and I am the 23rd person on Omegaven, and I am still on Omegaven.
I went to clinic this week and I had a DEXA Scan. I had to lay on this table and a machine went over me. It was not scary!! Clinic is NOT SCARY!!!
I enjoy playing Minecraft, watching television, and horse-back riding. Do you have Short Bowl too??  I'd like to hear from you.
More to come, see you later!
Posted by Gib and Abby Brogan at 11:02 AM 16 comments:

Ellie loved it!  We went to go pick her up and she was so happy we wished we could have left her there for another week.  There were 7 girls in her cabin ranging in age from 7-9 and a wide range of diagnoses.  She loved all the girls and can't wait to see them next year. From what she told us, it sounded like there was a party almost every day with different themes.  This picture is from the Carnivarty.  (Carnival+Party) 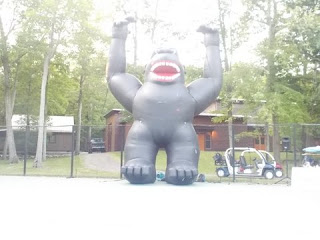 She swam in the pool 2 days, learned archery, caught her first bass, built the Santa Maria out of wood, took cooking classes, completed a ton of craft projects, performed Cotton Eyed Joe dance on stage with her cabin and did a solo demonstration of animal noises for the whole camp. 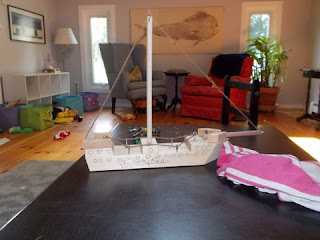 On the last night she was awarded a cooking award for a banana bread she made while she was there. Then her cabin later that night gave her an award call, Princess Energizer Bunny, for her endless energy.  Which if you have met Ellie, you know this was the perfect award for her.
These are photos of her with some of the counselors. 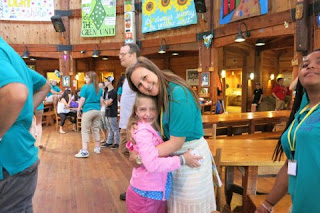 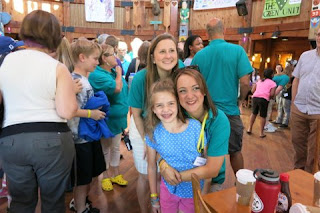 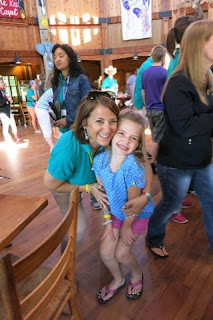 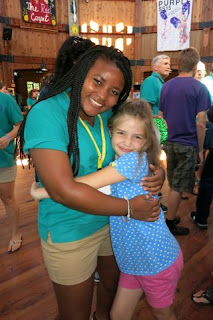 The medical team was amazing.  They set up her TPN and Omegaven at night, hooked her up, took care of her Omegaven throughout the night, got her line ready for swimming (twice) and had no leaks.  They kept her up to date on all her medications and oral fluid intake and never need PRN hydration.   She had a primary day nurse named Rose that she really bonded with and a night nurse, Kara that she loved as well. 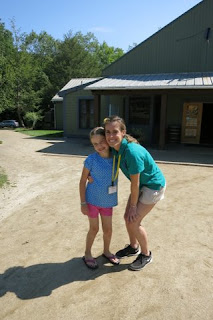 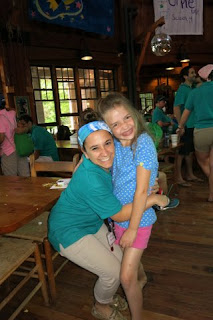 And with the help of the Danielle the Dietary Intern, she tried some new foods and found she loved them.

She had a bed in the Yellow cabin but spent her nights in the Moose lodge, the  lodge that is attached to the clinic.  This is because her Omegaven bottles need to be changed at night.  But she befriended the other girl staying there and they had sleepovers in each other's rooms a few of the nights. 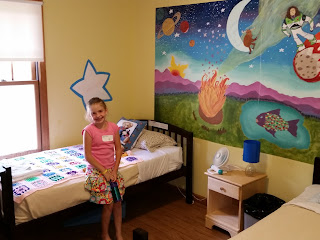 Ellie's bed in the Moose Lodge.
Over all it was a huge hit and she wants to go back for as many summers as possible.

Will had a great time while she was away.  We tried to keep him as busy as possible and made sure he had a great week too.

It was very odd not having Ellie around.  The first few days we walked around positive that we were forgetting something big.  Nighttime was the hardest time, we couldn't shake the feeling that we should be doing something.   We made it just over 48 hours before we called to the camp to check in on how she was doing. Next year will be easier.

I can honestly say that I never thought we could be saying this, but Ellie is at sleep away camp for the week!   She is at The Hole in the Wall Gang Camp in CT.  It took a ton of planning, scheduling and packing.  The last time Ellie spent a night without one of us was Thanksgiving 2006 and she was inpatient, with Sue our favorite nurse, at Boston Children's Hospital.

I thought Ellie was too young for sleep away camp.  But she disagreed.  Gib got the paper work going and now we are without Ellie for a whole week. She has a team of counselors, nurses and doctors taking care of her for us.  We spent the past week packing all of her medical supplies.  This tool helped us get ready. 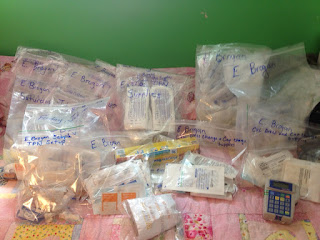 We hit the road at 7 a.m. this morning with a very excited little girl. We had to remind her that she needed to sleep the night before camp.  If it was up to her she would have stayed up all night asking us questions. 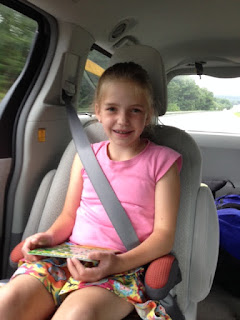 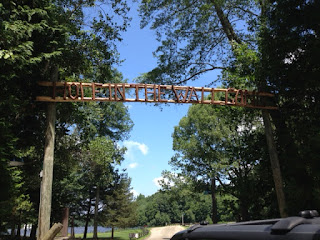 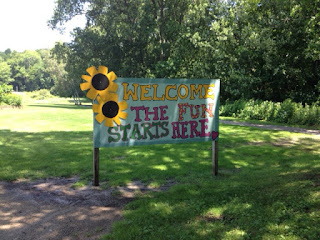 We spent 3 hours checking her in and explaining her medical stuff (TPN, Omegaven, G-tube, meds, oral fluids, diet and dressings) to the team.  Then took her to her cabin. 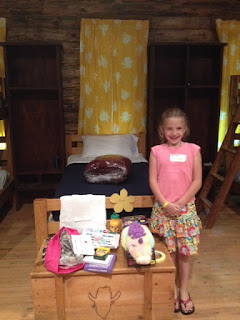 Ellie is in the Yellow cabin.  She actually has to sleep in a a lodge that is attached to the hospital because of her Omegaven bottles needing to be changed at night.  But she gets a bed in the cabin and will spend all her time in the cabin and then sleep and get dressed in the lodge.  So she gets 2 beds.  It does make her different than the other kids, but she was very happy to have 2 beds. 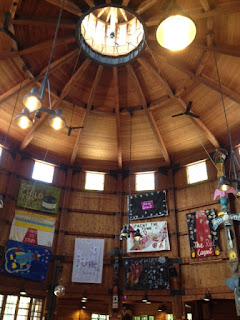 Overall Hole in Wall Camp is like a typical summer camp on steroids.  And that is coming from someone that spent 4 summers at summer camp and another summer as a counselor. 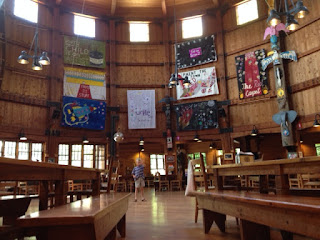 We left Ellie in her cabin and went to the family lunch.  Then hit the road home.  Needless to say both Gib and I cannot believe that this is really happening.  I think tonight will be when things really sink in.  We will be able to sleep through the night, there will be no beeping pumps, no medications to get ready, no formula to mix and for the first time since 2006 neither one of us is on call.

The fact that Ellie is gone hit Will halfway home from the camp.  But, a well timed ice cream cone solved the problem. 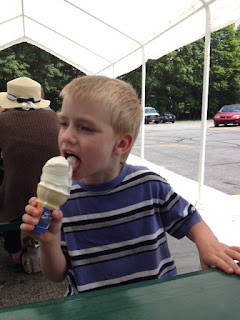 If you want to send Ellie a letter at camp, email me at abrogan@thriverx.net and I will send you her address.
Posted by Abby Brogan at 4:36 PM 3 comments:

Resources for Kids with Central Lines

There are tons of resources out there for kids with central lines, Short bowel or on TPN. (Adults have used them to explain their central lines to younger family members too)  I have helped my home infusion company produce many educational resources but my favorite thing they have produced is their children's books and the Strap Wrap.  If you are interested in any of these books or the strap wrap just email Abby at abrogan@thriverx.net

My Special Line: This early reader or read-to-me book addresses the importance of good line care in a simplified manner with rhyme and repetition. The book’s message is that a central venous line is special and needs to be kept safe, clean and dry. 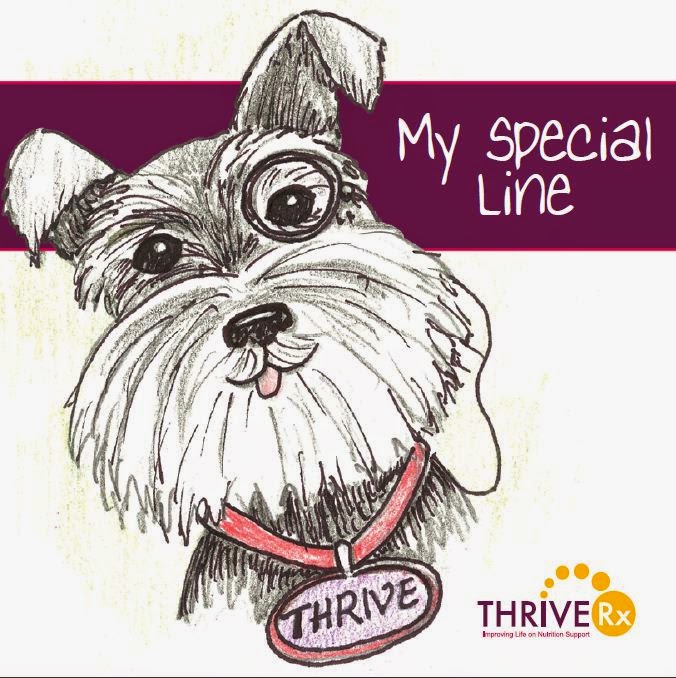 Let's Learn About Central Lines: This new book for elementary aged children discusses central lines, basic central line care and how children can begin to take an active role in caring for their central venous line (CVL).
Including:
•      What is a CVL
•      Who might need a CVL
•      How they can help keep their CVL clean and dry 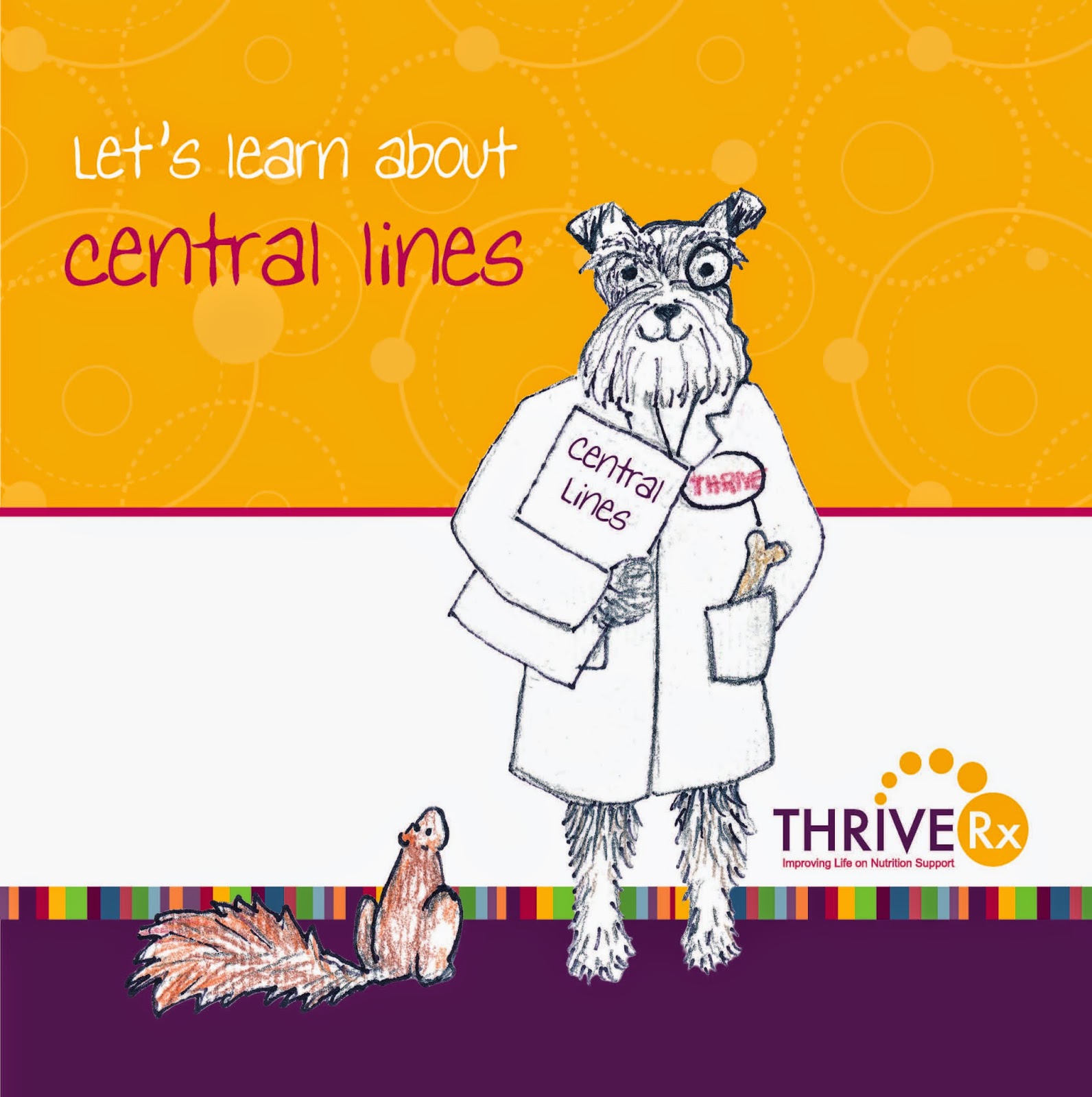 HENRY IMAGINES, An Adventurous View of Short Bowel Syndrome:
This is book was written by a father about his son with Short BowelSyndrome (SBS) - a condition many children and adults are living with all over the world.
By using his imagination, Henry takes the trickier parts of everyday life with an ostomy, G-tube and central line and turns them into an adventure! If your child or a young person in your family, school or neighborhood has this condition or has an ostomy, central line or G-tube this book is a great way to help them learn and have fun.  To order your copy visit: www.createspace.com/4806456 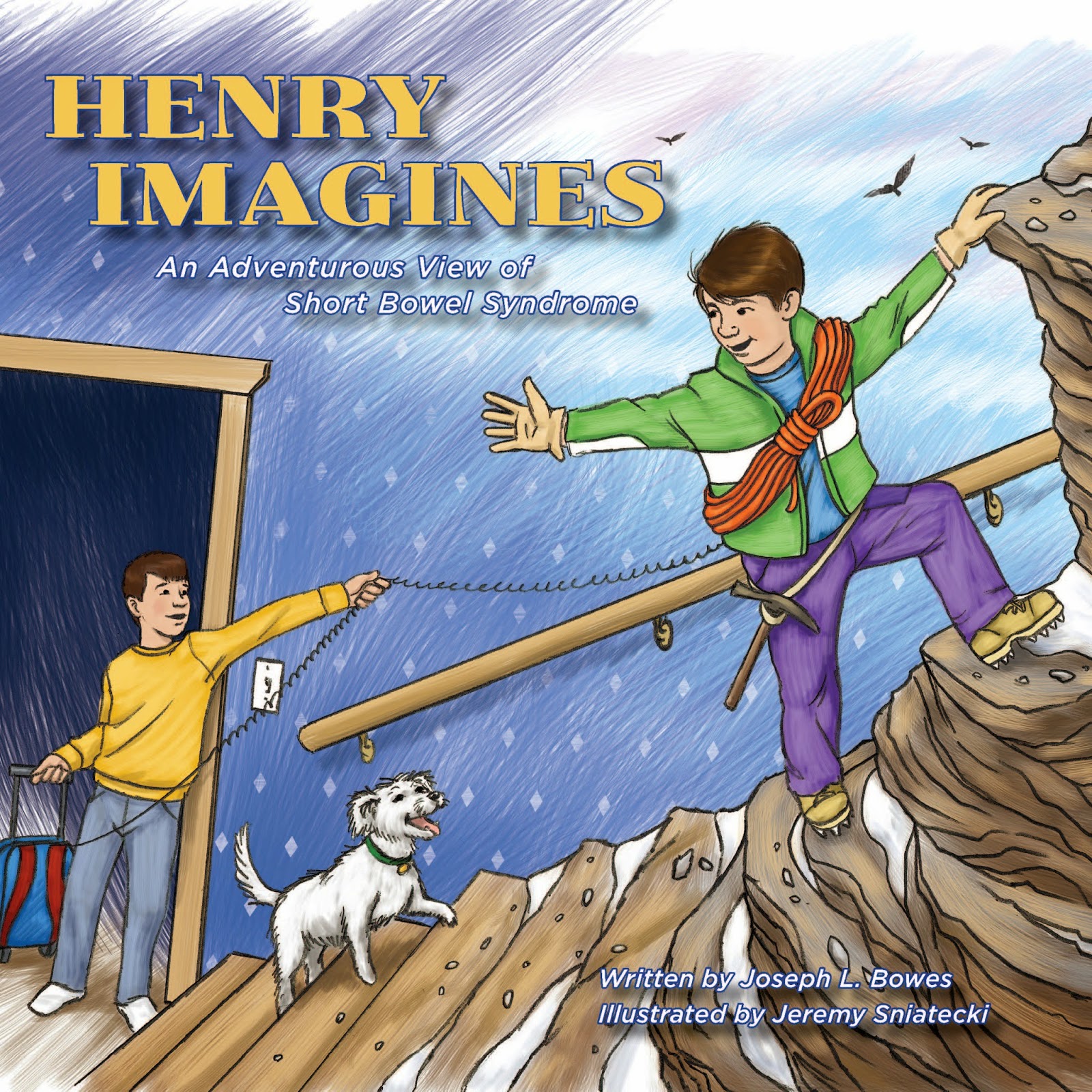 Strap Wrap: A medical free alert device for children or adults on IV nutrition support.
The strap can wrap around a seat belt strap,  purse strap, diaper bag or backpack strap.  The straps contains medical a short medical history, medications, allergies, Dr. contact information and emergency contact information.  It was created a grandmother of a consumer of BioRx the parent company to ThriveRx. 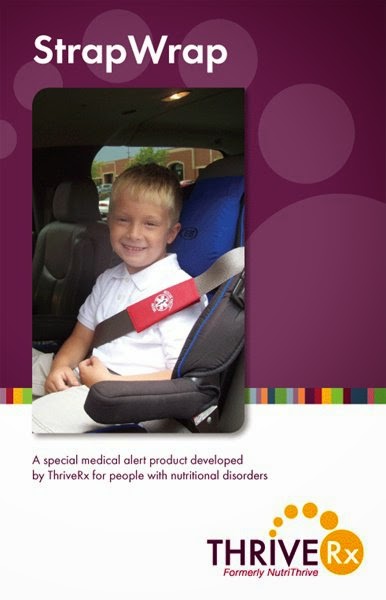 Watch this video to see the Strap Wrap in the news:  http://www.clipsyndicate.com/video/play/746694

If you are interested in any of these books or the strap wrap just email Abby at abrogan@thriverx.net.

Last winter we had a the pleasure of helping Boston Children's Hospital Home Parenteral Nutrition Team and the Dana-Farber Cancer Institute create a series of videos on Central Line Care.  Ellie and I had fun we honored to be a part of something that we hope will help others just like us.
Oh how I wish we had these videos to watch when we were starting out.

To watch all the videos visit: childrenshospital.org/centers-and-services/home-parenteral-nutrition-program/educational-videos
Here is a sample of what we did:

Hand Washing:
Using Hand Sanitizer:
Scrubbing the Hub:
Connecting Tubing:
Changing the Dressing:
I heard from another parent that one or more of these videos are playing on the patient channel at Boston Children's all the time as well.
Posted by Abby Brogan at 12:16 PM 2 comments:

Ellie was in the Boston Globe again! 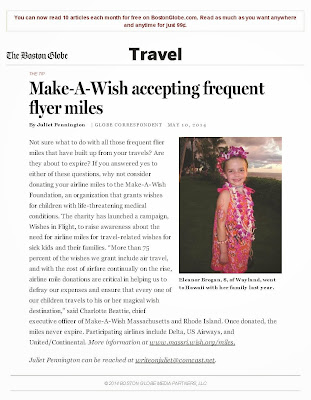 See the whole article at: http://www.bostonglobe.com/lifestyle/travel/2014/05/10/the-tip-make-wish-accepting-frequent-flyer-miles/U5yXAQGSafN1TgRBEvD8hM/story.html

Last fall after our trip we talked to Make A Wish about helping them in anyway we could. Ellie and I went to a basketball game at a local college to help raise awareness and said we would be willing to do more. They asked if they could use some pictures of Ellie for an internal newsletter and we sent them 5-6 photos from the trip saying they could use whatever they wanted if it helped others get a wish too.

We never thought we would wake up to Ellie in the Globe again.

If you have miles that you are not planning on using or can't use before they expire, please consider donating them! Once donated, the miles never expire. Participating airlines include Delta, US Airways, and United/Continental. More information at www.massri.wish.org/miles.
Posted by Abby Brogan at 12:37 PM No comments: