We realized yesterday, with a little bit of help, that it has been more than a month since we have updated this blog. We would like to say that this is because our journey with short gut, tube feeds, Omegaven, central lines, g-tubes, and the rest of our average day has come to some sort of and end. Unfortunately, we can’t say that. In fact in some ways we are further away from an end than we have been in the past. 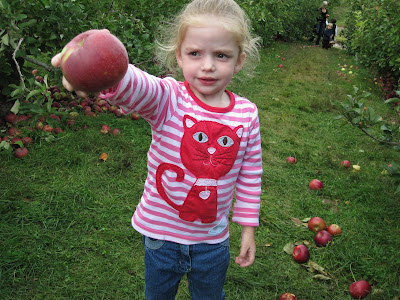 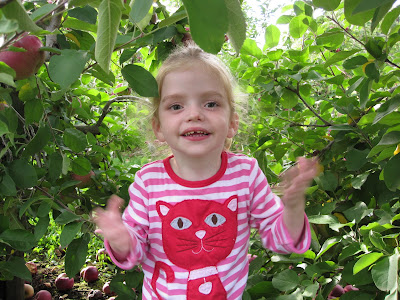 Hiding in the apple trees
I guess that things are so busy right now that updating this blog just falls off the list and by 10PM we just don’t have it in the tank to update things. I guess it is very similar to what got me into this blogging to begin with: I hated telling stories about Ellie and her condition without any emotion after the third phone conversation. The blog was great to share a best shot at an update and give everyone the best version. Now writing about Ellie’s very, very slow progress seems to be the same kind of thing. 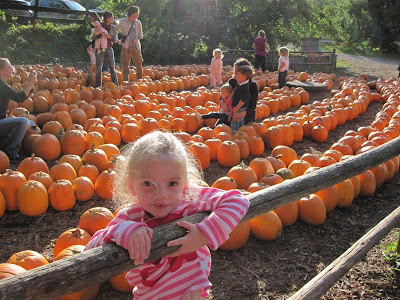 Finding that perfect pumpkin
Her progress has been slow but good. We are back down to only 3 nights of TPN/Omegaven and only 1000mls a night. She has also been eating really well. We have found that when Ellie is eating well and tolerating her food well, we feel like the sun is shining even when it isn't. When she isn't, well then there seems to be cloud over everything. Lately it has felt pretty sunny around here. 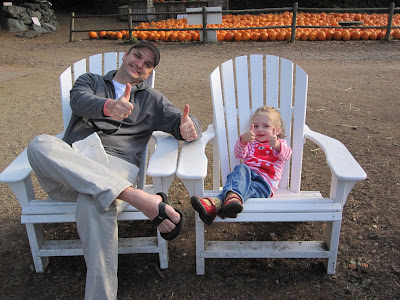 Some highlights of the last month:

Potty Training- Ellie has decided that the toilet is a great thing all of a sudden. She rarely poops in a diaper anymore and is working on the pee when she isn’t overwhelmed by the IV infusion overnight. Unfortunately for us, that means one of us (most often Abby because Ellie likes to poop with Mom) is up for the day most days around 5AM. But on the upside her bum is very happy to be clean and even the most acidic short gut poops aren’t too bad for her. Now if we could get her to move to the toilet for peeing we would be in a really good situation 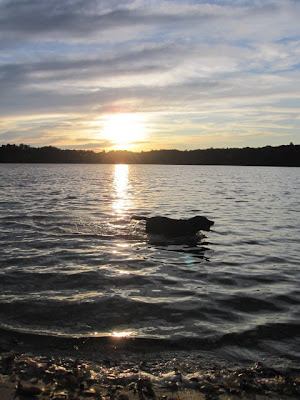 Fetch at the beach

Halloween- This year Ellie was a lady bug for Halloween. She really wanted to look like a "Real" lady bug so we broke out the sewing machine and turned her into a lady bug. 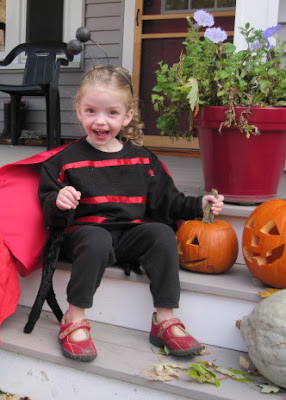 Pneumonia- For the last month we have been dealing with a nasty cold that has made the rounds among all of us. Ellie got the worst of this and last week ended up with what we like to call ‘running pneumonia’ last week. Running because even with lungs that ‘crackle’ she never slowed down, not once. Through the whole thing she lost a pound, one of those great pounds that we were so proud of her gaining after last summer. 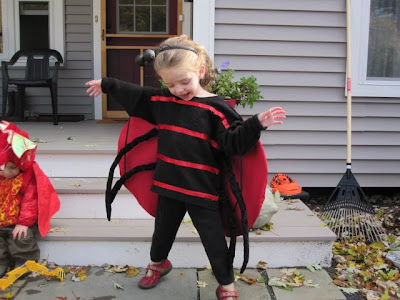 We also learned that even bronchitis/pneumonia is a serious risk for kids with a central line because of the possibility of the bugs migrating into her central line. It is such a risk that we spent a night last week in the ER getting line cultures drawn and starting a cocktail of IV antibiotics. In by 7PM out by 3:45AM. Have I told you how much I love the portable DVD player? All cultures were negative and she back to her old self. 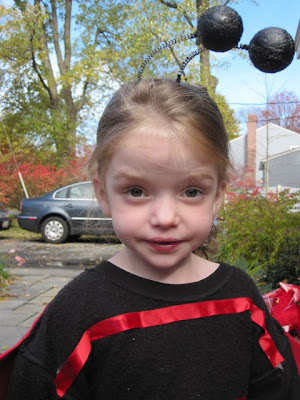 Pre-School- Ellie absolutely loves schools and the three mornings a week that she and her nurse Karlene go to pre-school are the highlight of her week. Even though she felt fine, her progressing pneumonia kept her out of school for a week and a half this month. We just couldn’t ask parents to keep their sick kids home to protect Ellie and then send her to school with an awful cough. Today she went back and never missed a step.

Over all she is doing great and very excited for the holidays. We are heading up to Maine for the first time since the middle of this summer. We promise to update more often!