Ellie is now 6 years old.   Over all she is doing well and is a very happy active little girl.  But she has been dealing with Short Bowel Syndrome and all that comes with it for 6 years.  Normal for her is not normal for most kids.  Her normal involves monthly blood draws, lots of doctors and often not feeling well.  Because of this we have started considering looking into a Make a Wish trip for her.

Before Ellie was born I thought that Make a Wish was for dying children.  One final wish.  But I was wrong.  These kids have to deal with so much.  Much more than any child should have to deal with and on top of that, they have to grow up, make friends, go to school and learn how to live their life.   We have realized that Make a Wish is for children who are dealing with a serious medical condition and now deserve a break.  They deserve to receive something special for putting up with all their medical issues.

So we have been considering this for Ellie but, we haven't done anything yet.  After a bad few weeks we were talking to Ellie about maybe doing something special for her.  We asked her if she could go anywhere, where would she want to go?  Ellie thought and thought and said, "America's Test Kitchen."

For a little girl who has a very limited diet and often has a belly that just doesn't feel good.  She loves to watch America's Test Kitchen, read Cook's Illustrated and cook.  She knows everyone on the show and talks about them like they are family.  So Gib sent America's Test Kitchen an email, a really good email. 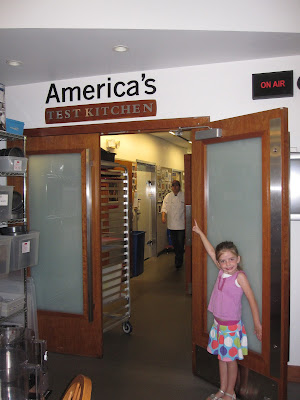 We walked in and while we were waiting for the tour to start Christopher Kimball walked by and Ellie fell out of her chair.  He walked by again and met Ellie.  I'm sorry to say that I was not on the ball and did not get a picture.  I was so taken by watching Ellie completely lose her mind.  After Chris, as Ellie calls him, left we started our tour. 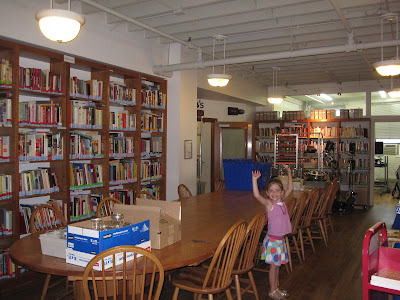 We started in their cookbook library containing over 3,000 cookbooks.  Then we saw where they photograph their food for their cookbooks.  They use real food and were talking all about who was going to get the meat loaf or the chicken for lunch. Nothing I have ever cooked looked as good as those plates of food.  Then we moved on to the kitchens.  As we walked in the door Julia Collin-Davison walked out and said, "You must be Ellie!" 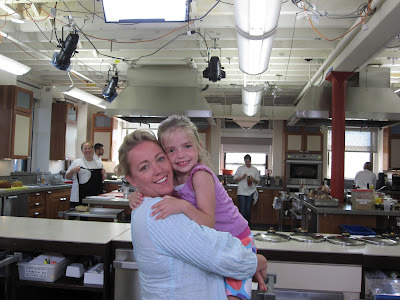 Ellie has said many times that Julia was her favorite person on the show.  We were told that Chris might be there but they weren't sure about Julia.  Julia WAS there and gave Ellie a tour of all the kitchens, explained some of the tests that were being run and showed us all the equipment they use.  Ellie was in heaven. 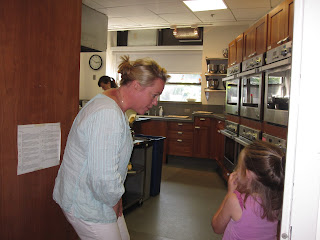 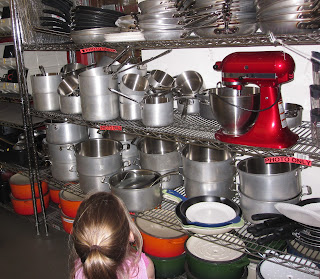 All the pots and pans they use for filming and photographs.  Notice how clean they are! 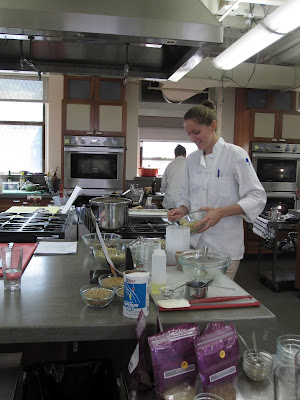 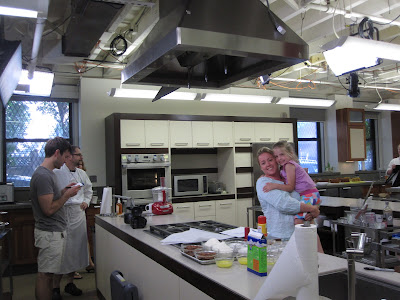 Ellie and Julia on the stage where they do all the TV shows. 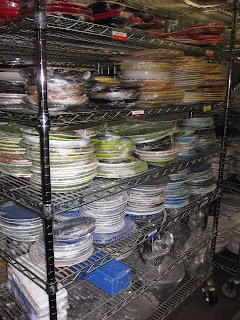 All the plates that they put food on, they wrap all clean plates in saran wrap to keep them clean. 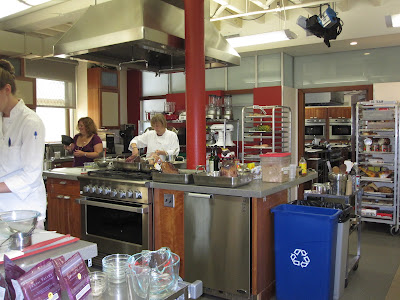 We had a great time and didn't want to leave.  Thank you to all the staff at America's Test Kitchen for taking time out of your day for Ellie.  Thank you especially to Shannon, Julia and Chris.

Ellie update:
Ellie has been doing well.  We have had our ups and downs.  We had some hick ups last fall but over all she has been doing well. She is still off of TPN but still on IV hydration of D15 every night.  We stopped over night feeds early last spring due to a bad round of Small Bowel Bacterial overgrowth.  That fixed the problem but it still comes back every 1-2 months for a week or so.  We are going to restart them in the next few weeks.

We also tried a new formula but the verdict is still out on that.  We had to go back to good old Elecare for a bit but we will try the new formula again in the next week.

Other big news is that Ellie finally gained and grew this summer.  She has been holding steady on both for most of the past year.  It was brutal to watch her numbers go across the charts not up over the past year.  But at our last clinic visit she had a nice jump up in weight and height.

All in all we are doing well. 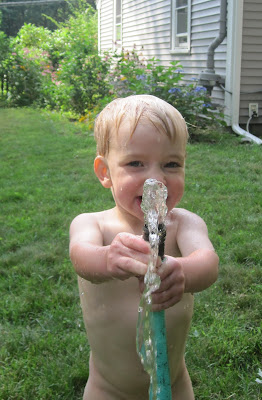 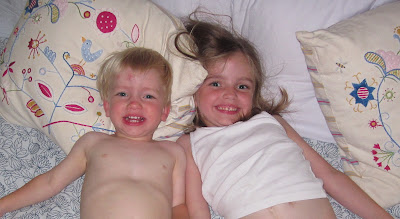