Third time is the time charm right?
So yesterday during Ellie's CVL dressing change I noticed something dark in the thin part of the catheter.   Then I gave it a squeeze and it was hard.  Ellie has two repairs to her line, one close to the skin and one that lives outside her dressing.  The only thing we could think is that it was the metal hose barb that slides into the old line during a repair.   Some how the metal piece had jarred loose and was moving down her line (closer to moving into her)  We had no idea that this could happen and when we called Dr. Jennings he said the same thing.
The main concern was not the metal piece working its way into Ellie since there was another repair down stream that would have stopped it.  We were more concerned about
So we knew we needed a repair.  Dr Jennings said he could do it this afternoon, but with the dry time the repair needs we would have had to push Ellie's night time infusion way back.  We have a repair kit here at home and I have done it before, so why not do it again?  OK, so the first time time I did it I had a world class transplant surgeon talking me though it.  But, I could do it by my self, right?  Right.
Oh, yeah and because a picture is worth a thousand words, how about video?
What you are watching:
We were right that it was the metal piece from the old repair and we are going to bring it in with us to our next clinic visit for show and tell.  All in all it went well, Ellie is now asleep with D10  running at her normal rate of 125ml/hr.   I only felt like barfing for a few hours after cutting her line, and I am feeling better and better the longer we go with no incident. 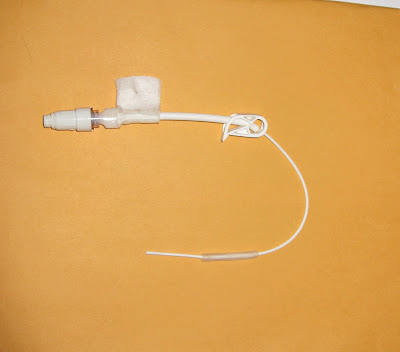 This is the old line post repair.  It will soon be attached to one of Ellie's dolls.  This is not how we thought we would be spending our Tuesday morning.  I think we will all finally relax in 72 hours after the threat of infection has passed.
Posted by Gib and Abby Brogan at 10:11 PM

You are amazing parents! Our son was diagnosed with short gut and we are starting to learn a lot. I finally created a blog after finding yours, as yours comes up with a lot of google short gut searches. Does your daughter have a gtube? They just told us that they want to put one in when they reconnect his intestines. Our heads are spinning and I enjoy seeing how well you document your adorable little girls story! I have your blog added to my prayer blog roll for tough cookies.

Gib, you know I love you with all my heart, but before I rolled the video, all I could think was "why on earth did you do it and not Abby?!!!" And then I watched the video and realized that Dr. Brogan was the lead surgeon. And still, the cut literally took my breath away, even though I knew everything was fine. You people have iron constitutions.

I can't even get Jack to lie still for a diaper change. Jeeze.

Holy nerves of steel. I did break a sweat watching the video. Good job! Oh, and good to know about the barb being able to move (!).

A picture is worth 1000 words, 2 words for that video-clip "Pucker-factor"! Nice work!

I think the best part of this video is that you can hear the movie in the background saying "you did a good job! Your instincts were right on the money," or something like that. Pretty fantastic timing for that particular line, huh? :)

FWIW, I'm a nursing student in MA and have been reading the blog for a few months now. Thank you so much for sharing - you are a brave and amazing family and I learn so much from you every time I read!

Wow you guys. Intense stuff. You are very brave and I am very impressed. Hope things are ok.

Just found your blog. Your daughter is so precious!! Were you at Oley last year?? She looks familiar!
My heart was in my throat just watching that repair! We just had 2repairs done last week (the first time didn't hold). The second time the nurse taught me how to do it. If we are far from hospital when it breaks, I plan to do the repair myself. Although in the ER it takes 3 of us just to hold down our busy boy, so that should be an adventure!

Hi Gib, you may not remember me but I was a close friend of Beth's from at least junior high through college. I'm an oncology nurse now and I have blown a central line when flushing it and have then had to phone a half dozen doctors/surgeons before one would come to the floor to do a line repair. It is amazing what parents can do when they have to. Your daughter is beautiful and clearly a happy child. You are fabulous parents. Take care. Kim (Whitten) Livingstone