In December Ellie's ostomy started to misbehave. A misbehaving ostomy dumps fluid and is a real hassle for us since we have to watch her hydration and supplement fluids to keep her from going dry. It is also a hassle because dumping food gives the food less time in her gut to be absorbed and slows her growth. 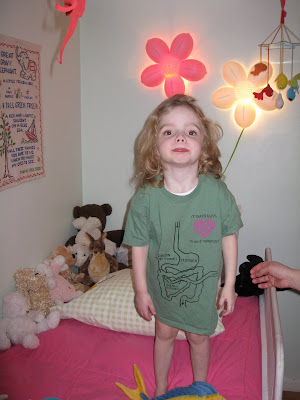 If my Mom and Dad ever forget my plumbing, now I have a t-shirt with a diagram...
We had lots of theories on why she was dumping. A food that disagreed with her. A physical 'plumbing' issue that was caused by the catheters in her manometry study. Too much formula. Too little formula. Gut bugs. You name it we thought about it as the cause of the trouble as we watched her dump more fluid than a full grown adult should each day.

After a few weeks we talked to her doctors and tried to manipulate things to make her stop dumping fluid. Some things worked for a day or two but there was always a HUGE day at the end of the good days that set us back.

Finally we flew against our assumption that her ostomy was protecting her from an over growth of a carpet of bad intestinal bugs called small bowel bacterial overgrowth (SBBO, for those that did acronyms like I do) and we started her on Flagyl, the standard antibiotic for over growth. Since her version of short bowel left her without the valve that keeps the good short bowel bugs and the bad large bowel bugs in their appropriate places (the ileo-cecal valve or ICV), the bugs sometimes migrate to be where they shouldn't be. Snaking a couple of catheters in there in December may have helped things find new homes as well.

A week of flagyl and nothing had changed. Flagyl just didn't touch them which made us a bit anxious that we wouldn't be able to find the cause and that she may just dump a lot for a while.

Not fun or really good for her.

Then last week her doctors pulled out the big guns and started her on a course of Cipro. Yes, the same stuff that they give to anthrax victims. Heavy-duty drugs.

Voila! Presto-change-o, things dried up over the weekend.

It seems that Ellie may have had some super-powered bugs in her gut and just needed the heavy artillery to fight the fight for her.

Or we could be entirely off the mark and it was just the water in Maine this weekend.

No matter the change that brought it about, things are on the upswing and we hope to get moving forward again sometime soon.

If you are curious, here is the detail of her t-shirt, made for her by a very talented artist friend of ours in Vermont: 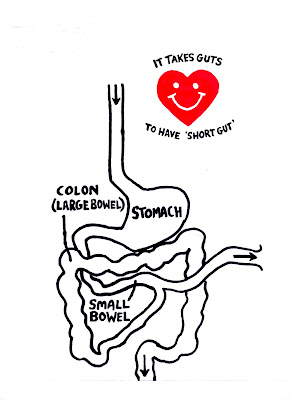 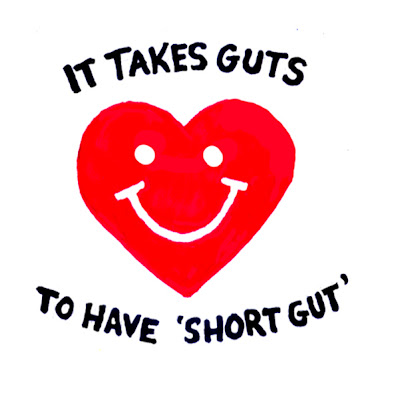 Posted by Gib and Abby Brogan at 1:34 PM

I think it was the massive love and adoration lavished on her by her aunt over the weekend. Anytime, really. I'm happy to help.

Yeah, we're TOTALLY taking credit for this. It's all about Maine.

So glad to hear things are back on an upswing. And I adore that shirt, how fantastic!

I know every child is different, but Flagyl never does a thing for Caed either with overgrowth. (Vanco seems to do better). Glad you guys found something that did as well!!

I love the shirt! Blaise's plumbing doesn't look like that at the moment, but does your friend have any interest in putting the heart/slogan on a onesie? I suspect there's a market.

So glad to hear that the overgrowth is under control.

By the way, they also give Cipro to run-of-the-mill bohunks traveling to Ethiopia just in case they pick up any intestinal nasties along the way. Or so I've heard...

Hi, I am just putting this out there. I started to mix Andrew's formula with white greek yougurt and he went from 9-10 stools a day to 4-5.
Jarka, Andrew's mom. Andrew 3 years old, 4 months off TPN

I love the shirt!
-Erin Maruska

I don't know about Maine, but Aunts are always the perfect cure.
How much for a shirt like that? Are they in production for those of us with too much gut?
-Aunt Karen