That's how long we lasted this time.

we came home from Children's on Thursday afternoon and made it to Sunday lunch before we had to go back.

Ellie recovered from her study quite well and was raring to go on Friday and Saturday in the first real snow of the year. 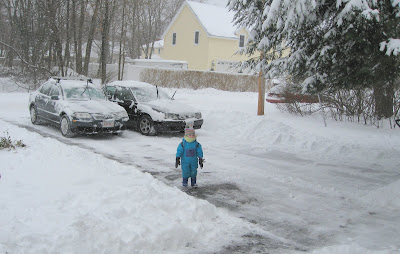 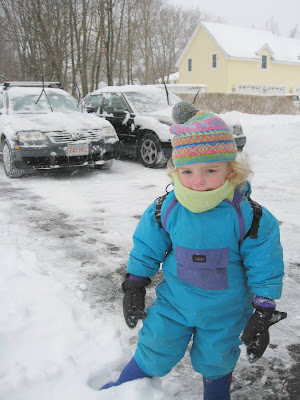 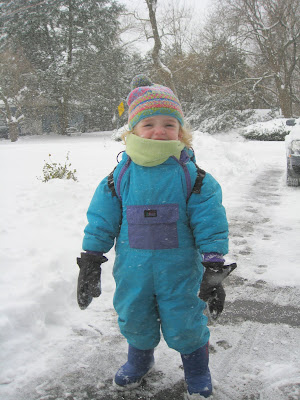 We even broke open the gingerbread house and managed to decrate the whole thing without a battle over not eating the candy: 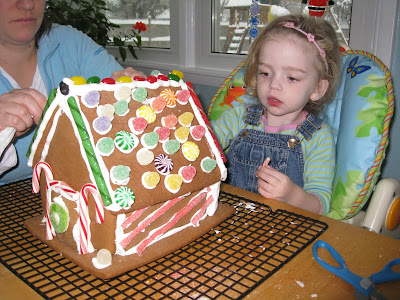 The one thing that we noticed is that the girl who took a suppository to poop before her study was now pooping freely after the study snaked three tubes into her bowels.

We chalked it up to good luck and figured that it would pass by Friday. It slowed a bit Friday but by Saturday we had 8 poops and by Sunday noon we had another 6. That borders on what the doctors call 'stooling out' and we gave a call down the road. Ellie was and is in great spirits (except for her poor bum) but that kind of activity set off alarms for all off us.

As luck would have it the surgeon on-call this weekend was none other that Ellie's surgeon, Dr. Jennings who asked us to come in to the ER for bloodwork (to check her electrolytes) and a couple of stool samples because as he put it rotavirus is every where at Children's these days. So off we went at 35 MPH down the Mass Pike through day three of a very long snowstorn that made me shovel four times....

By 5 we had clean bloodwork results, a sample of ostomy liquid was sent off for the tests and we were heading tothe car when Ellie told us: 'I am pooping, now'. So back they went to give a stool sample and we headed back down and even worse MassPike to get home.

It will take a day or two to get results and if it is rotavirus, we may have a significant change in our holiday plans in the works. We are hping to avoid a Children's Christmas.

Ellie is very excited about Santa.

But there isn't anyhting we can do about that one. we'll wait and see.
Posted by Gib and Abby Brogan at 9:04 PM

We will be thinking about all of you. Hope Ellie gets to feeling better. Connor wants to see new movies of Ellie up soon!-The Maruskas

my 14 month old is also short gut- she was born with jejunal atrestia went home after 3 weeks -she was great!! at 10 months bowels kinked and died losing all but 40 cm of her sm bowel. 2 weeks later came home an has struggled since. no tubes or anything but a special diet. no sugars, root or orange vegies, no fruits but white. hence we are bairly 14 lbs. i love love to chat with you if you ever have time email is amandalewis81@yahoo.com thanks amanda

Wow guys- I remember standing at our window this weekend looking at the terrible road conditions and saying to the nurse that this would NOT be a good time to have to come to the ER...

I'm glad you got here and back safely! I hope your results come back clean. IF you do end up back here let me know we'll come say hi!