Yesterday was a scheduled trip to Children's for us with Ellie. Before her surgery later this month Dr. Jennings would like to know what we are looking at and also have a baseline against which we can compare any post-op changes.
To do this it meant another contrast upper GI study with our friendly radiologists (who somehow remember her).
As a very aware three-year old, Ellie is getting more keyed in on what is going on than she has been in the past. She knows what the hospital is and what happens there, and who and what we see when we are there. For the most part she is positive and excited about going to the hospital. She tells us about the big soft bed, the buttons that makes the bed go up and down, and the table that comes across her bed. When I tell her stories at bedtime about her favorite fictional creatures, Fish and Octopus, and their trips to the hospital, the stories do very little to put her to sleep since she stops the story when we forget a tiny detail of what we see as we walk through the hospital (No, daddy, after the cod, we see the bubble wall, and then the elevator...)
As we ate dinner Tuesday night we started talking about Wednesday's trip to the hospital and going in for pictures of her belly. For the first time there was some anxiety. we didn't know what to do since most of the time she runs into the lobby and is happy to be there.
On the fly we started telling Ellie about what the upper GI was, that it wouldn't hurt and that it was just a very fancy camera to take pictures of her belly. Abby then suggested that she could bring a camera and take pictures of them as well.

Problem solved. Phew.
So we went in and had the normal UGI happy as can be: 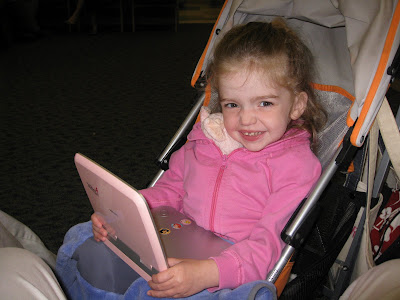 An initial belly film, load of barium chalk through the g-tube(another good use for a g-tube), more pictures and some manipulation: 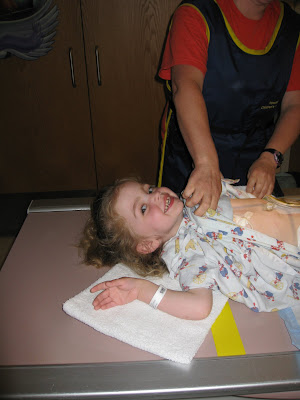 a lot of waiting, lots more pictures (even Arnold the Piglet got films taken) 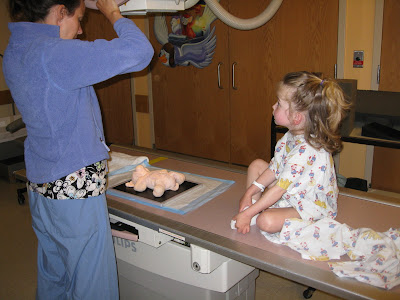 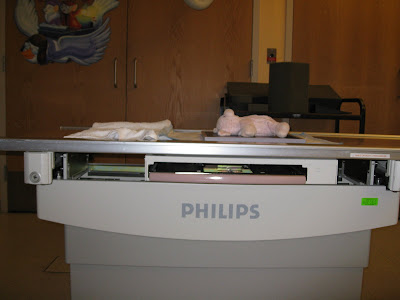 and we were out the door five hours later.
No tear, no arguments. One free ballon for super girl.
So no we wait to hear from Dr. Jennings about the results with a bit of dread since the radiologist did use the word 'dilated' when he was looking at her films: 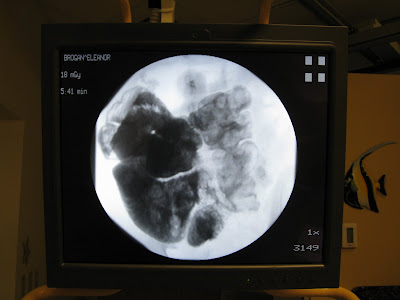 We are crossing our fingers about this and hoping for the best with an undersatanding that the radiologist likely didn't have much experience looking at Ellie's unique plumbing and Abby had to draw a diagram for him to explain what was where, how it was connected and how it works.
On the upside, now that the UGI is done, we are on the cancellation list and can move her surgery up if there is an opening in the next few weeks. Fortunately things at This Old House are slowing down and we are down to one final carpenter so a stay at the Inn could really work if the opening happens.
We figure the sooner we get her in, the sooner the recovery starts and the sonner summer starts. We have plans to go to the Oley Foundation Conference in Florida in the end of June and are going to do everything we can to keep those plans.

Ellie needs to know other kids with tubes and there is a great community of families at Oley to get to know.
Posted by Gib and Abby Brogan at 9:26 PM

You are awesome parents. I love that Arnold needed an x-ray too! I'm thinking good thoughts for all of you.

Why would any kid go to another hospital after hearing how well Arnold was cared for at Children's?

OK, the pictures of Arnold just about did me in. Could Children's be any cooler? I hope Ellie and Arnold both get good results from Dr. Jennings.

Thank you so much for writing in such vivid detail...it really does help other families who might be in the same boat! You guys are wonderful and I can't believe how big & beautiful Ellie is getting!