Menhaden Matter, In a New Sort of Way

Right now, Eleanor is being fed with a Total Perenteral Nutrition (TPN) system. This consists of a bag of fluids that looks like Lemon-Lime Gatorade and a fat white syringe of fats that are injected into her Peripherally Inserted Central Catheter, or PICC line in her right arm. This supplies her with almost everything that she needs to grow and develop. TPN is one of theose miracles of modern medicine that wasn't around 30 years ago that saves lots of lives, both infant and adult.

One of the quirks about TPN is that when infants are on it for an extended period of time (which varies from kid to kid), there is a negative effect on the kid's liver, eventually causing cirrohsis over time and necessitating a transplant of one, two or more organs. Nobody knows why the TPN causes this damage in kids but it is an accepted fact of the feeding through TPN that once you start it, you are in a bit of a race to get the kid off of it before the liver damage happens.

Curiously, and unbeknownst to us before we came to Children's, there is a doctor on the staff who is working on the million dollar TPN mystery question and has an innovative new treatment that may better better for kids than the traditional TPN. 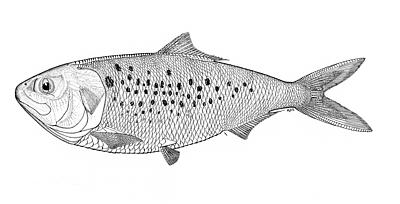 Traditional TPN uses soybean oil as the fat. In a curious turn of events for Abby and I who have spent our lives chasing and working with fish, the doctor here is trying using oil from menhaden, a nasty little oily fish that most people use for bait or grind up into fish meal for use in dogfood, as a substitute for the soy bean fat. It turns out that the Omega-3 oils that are in the fish oil are anti-inflammatories and may decrease the ill-effects of TPN in infants and small kids. So far the doctor has had either positive results that reduce the ill-effects or null results that have no effect either way compared with soy oil.

Abby and I spoke with the doctor yesterday and asked a million questions of him and agreed that this is the best thing for her since the name of the game in her treatment is time. We hope that fish oil wil give her the most time to teach her broken intestine to be a super intestine.

Besides, if there were ever a sign of something that we need to do, having a fish show up in a hospital just may be it.

We recieved word today that Ellie has been approved by the FDA to be a participant in this study and will begin her fish eating life with menhaden. Abby and I will continue our fish eating life tonight with a round of sushi.

No menhaden on the menu. We hope.
Posted by Gib and Abby Brogan at 4:16 PM

Fish oil-it is a miracle "food" for lots of maladies-let's hope that it's what Ellie needs, especially with 2 parents who are fish people. . I have a good feeling about it. Does Ellie have her fish quilt? Happy Birthday, Abby-

Congrats on Ellie's FDA approval (I feel like she should get a special label for that). This sounds like a great step. Abby, I didn't know it was your birthday! Hooray for that too! :)

I heard you had a blog so I google the Brogan family and finally found it.
Ellie is in our hearts and prayers. Rory prays for her new cousin everyday at school and can't wait for till we get to meet her.
Love,
Suellen and Frank

Poagies! All I can think about is the amount of time we've spent chasing poagies and the times we were in the middle of a school while the blues were hunting them from below and the osprey's huted from above. When they disappeared, we blamed the Russian trawlers. Well, I'm glad poagies are still around.

Poagies are now my favorite fish. Let's hope they become Ellie's favorite too.