So an NPO kid goes to preschool....

Week one of preschool has been a smashing success for Ellie. 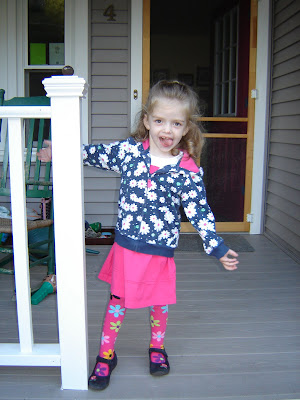 In the words of one of her teachers, she is 'a joy'. It's nice to know that someone else is a as big a fan of our girl as we are.
Ellie still isn't eating and is just barely drinking anything each day. She drinks about 3 ounces of elecare a day along with about an ounce of water. Some nights we see significant residuals in her stomach and some nights we don't. Go figure.
Having an effectively NPO (Nothing by Mouth) kid at preschool was a concern for everyone. Eating is a big part of the day in a half day preschool since snack is part of the the schedule. What would she do if she can't eat? Sit in the corner with her finger in her nose?
Come to find out, at this preschool, in addition to having some great teachers who seem to 'get' Ellie, their daily schedule is built to have a 'free form' snack on the fly. Whe she is ready to eat she can but for now she can keep on moving striaght past, or, as one teacher suggested, stop and have a 'special snack' of ice chips. Gotta love professionals.
So this worked out the typical days at preschool, but what about special events like birthdays?
No need to worry. Leave that one to Ellie, (who is not quite 3 1/2):
Yesterday was a birthday for a child in her class. The parents brought cupcakes. Even though she doesn't really like sweet things, she loves the idea of cupcakes and had even eaten a tiny bit in the past.
We were all were dreading this and Abby and I have discussed this with her teachers about ways to talk about it and distract her. we were all prepared for a meltdown when she couldn't eat just like you would expect when you tell a preschooler that they can't do something that everyone else is doing.
Come to find out that when the cupcakes came out, Ellie looked at her teacher and said, 'I like cupcakes. But my belly isn't ready for them yet. I think I will have some milk and some ice chips instead.'
She isn't 3 1/2 yet! At 36, i would be screaming bloody murder for my damned cupcake but Gut Girl gracefully took a pass and moved on.
Unbelievable.
Posted by Gib and Abby Brogan at 3:08 PM

You have done an unbelievable job with your amazing girl! Can you imagine passing up cupcakes for Elecare!!

But for the Grace of Toddlers, go we.

How awesome is Ellie?!? I'd want the cupcake!

You have a very sweet, smart little girl. She seems to have insight well beyond her years.
- Nikki