Have you ever seen one of those mother birds?

You know the ones that carry huge sticks in their beaks back to their nests. Well that's Abby these days, walking around in circles, arranging branches and making the nest for our girl.

All systems are go to bring her home on Monday. We have found a nursing service that has nurses for us, the medical companies that supply TPN, formula, and medical supplies (three separate companies) are all set for our arrival and most of what is left is waiting for the day to come. Oh, and practicing my moonwalking.

That isn't to say that things have been dull or that we haven't had doubts that this could just be a big old fake out.

For example, Ellie's central line started acting up yesterday for no apparent reason. we usually can give her IV fluids and also draw blood fro her line to avoid a needle stick. Well yesterday afternoon, the blood just wouldn't come out. The saline flush would go in, but nothing would come out no matter how we moved her or contorted her.

Ah, crap, says Gib. The line must be shot or kinked inside. I had visions of going to radiology, seeing that it was shot and signing up for another few weeks at the Longwood Suites.

Well, it turns out that sometimes little clots form in the line and work like a flap that allows fluid in but not out. No big deal. In then end, we hit her line with some IV Drain-O today and everything is clear. But it was another in the line of things that remind us that everything is subject to change with Gut Girl.

Add into that a suggestion that a dot on her belly scar looked like MRSA (Methicillin-Resistant Staph Aureus) a really nasty bug that lives in hospitals. Yup, the possible delays keep coming. No it wasn't MRSA, but it made us both nauseous to think about it.

On the homefront, Abby has made a nice nest for us to plunk Ellie in whenever she gets here. The crib is in place, the table to do medical stuff is set and all we need is a bouncing, giggling 8 month old to make it lots of fun. 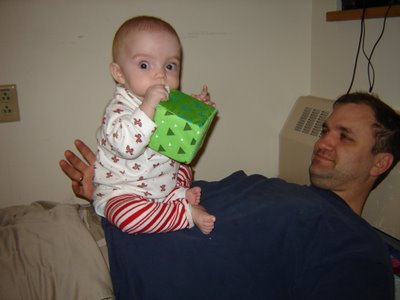 Another cool, strange thing happened tonight. I learned that this little blog has been nominated as one of the ten finalists for the Best Medical/Health Issues Blog for the The 2006 Weblog Awards!

I know I don't have a prayer of competing with the professional blogs, but if anyone wants to vote, voting goes on through the 15th at this link: http://2006.weblogawards.org/2006/12/best_medical_health_issues_blog.php .

It is cool just to be nominated. And I get use this fancy logo:

Although I think that things got a little thin this fall, I am glad that I didn't have more to write about.

Dull days are bad for reading, but are good for us.
Posted by Gib and Abby Brogan at 11:04 PM

I really can't begin to imagine the range of emotions you all must be feeling. I'm peeing-my-pants excited for you out here in Saratoga Springs.

I'm voting, and telling all my friends to vote, too.

I've just voted for the best blog ever. I'm excited for you that Ellie is going home - hopefully Olivia will be following this trend. Ellie - you have amazing parents. I will continue to pray that all goes well for the grand departure on December 11.

You can vote every 24 hours!

You two know that you have my vote(s)!

Gib, remember to be careful while you are moon walking through the lobby of children’s. That revolving door really jumps out atchya.

Don’t worry about the slow days! I would rather have a “boring read” than anything else… (Knock on wood everybody!)

Aloha. I just found your blog through Denise's post about the Weblog Awards on blogher. By "just" I mean over four hours ago, because I've read straight through. I'm an adult with SBS, the result of a ruptured bowel over twelve years ago. It's been a real roller-coaster ride to read of your journey from Ellie's birth to "almost home." I am in awe of both of you & will continue to follow the story of Ellie and her two fabulous parents. Best of luck with the homecoming and all that follows. Now I'm off to vote, get out of my jammies and start my day! Mahalo nui loa (thank you very much) for sharing your story!

It's almost Monday and we can hardly wait to see the exiting pictures. Your family is amazing.
And we've already voted twice...