Ellie is doing very well today. She is alert and awake and looking around when she is awake, but sleeps a more than usual during the night and during the day. Hey if you had an infection like she does, you'd sleep a lot, too. 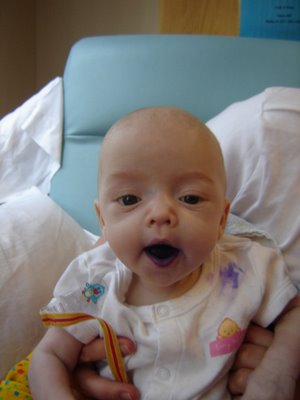 One of the most amazing things is the look on the doctors' faces when they come to look at her every day and discuss the treatment for her infection, which we have narrowed down to being a gram negative rod infection of her central line and also her blood itself. One of the nastier of all infections. 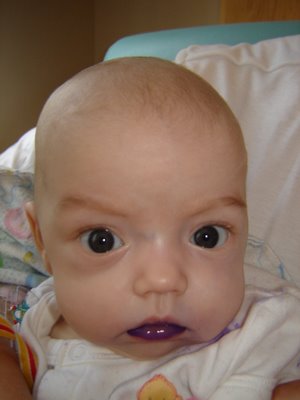 'Wow, she looks great. Not what we would expect."

That is quickly followed by: "why are her lips so blue?" The medicine that treats the thrush in her mouth dyes her mouth and her clothes a nice purple color. If only it weren't purple. I've got a daughter who looks like she borrows A-Rod's lip gloss!!!!

This prompted me to ask Ellie's Omegaven doctor this afternoon whether this was a great side effect of her fish oil treatment.

Yes, the infection that she has has mortality rates associated with it. Somewhere between 25 and 30% of all cases from what the doctors tell us. That includes the kids who become very very sick and go to the NICU. Still this is an eye opener for us and very scary to think about.

Fortunately, knock on wood, Ellie's infection was caught very early (a blood culture was in the works even before a fever came on) and she is doing well on the cocktail of antibiotics.

Thanks, it seems, in part to a nice foundation of menhaden squeezings and a very alert doctor who watches ellie's blood work like a hawk.

Some scary words in that there entry - sepsis... mortality rate... A-Rod... Yikes.
I have no doubt that Ellie is tougher than any gram negative germs, and we all know that she's way cooler than A-Rod. Looks better in the purple lip gloss, too.

Keep on kicking that short-gut butt, Ellie! Red Sox Nation needs you off the DL!

I'm 15 years old. I was born with HIV my mother passed away because of the HIV infection And I regret why i never met Dr Itua he could have cured my mum for me because as a single mother it was very hard for my mother I came across Dr itua healing words online about how he cure different disease in different races diseases like HIV/Aids Herpes,Parkison,Asthma,Autism,Copd,Epilepsy,Shingles,Cold Sore,Infertility, Chronic Fatigues Syndrome, Lupus Cure,Fibromyalgia,Love  Spell,Prostate Cancer,Lung Cancer,Glaucoma.,psoriasis,Cirrhosis of Liver, Cataracts,Macular degeneration, Chrons disease,Infectious mononucleosis.,Cardiovascular disease,Lung disease.Enlarged prostate,Osteoporosis.Alzheimer's disease,psoriasis,Bipolar Disorder,Dementia.,Tach Disease,Breast Cancer,Blood Cancer,Colo-Rectal Cancer,Love Spell,Chronic Diarrhea,Ataxia,Arthritis,Amyotrophic Lateral Sclerosis,Stroke,Fibromyalgia,Fluoroquinolone ToxicitySyndrome Fibrodysplasia Ossificans ProgresSclerosis,Weak Erection,Breast Enlargment,Penis Enlargment,Hpv,measles, tetanus, whooping cough, tuberculosis, polio and diphtheria)Diabetes Hepatitis even Cancer I was so excited but frighten at same time because I haven't come across such thing article online then I contacted Dr Itua on Mail drituaherbalcenter@gmail.com/ . I also chat with him on what's app +2348149277967 he tells me how it works then I tell him I want to proceed I paid him so swiftly Colorado post office I receive my herbal medicine within 4/5 working days he gave me guidelines to follow and here am I living healthy again can imagine how god use men to manifest his works am I writing in all articles online to spread the god work of Dr Itua Herbal Medicine,He's a Great Man.