Short Gut goes to the Street 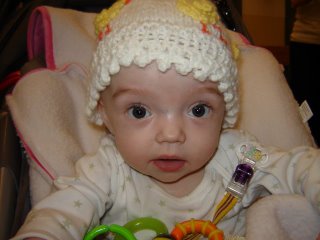 Today's Wall Street Journal had a long article about the relationship between Ellie's doctors here at children's and the pharmaceutical company that makes Omegaven, the IV fat source that is letting her grow without the liver complications of other IV fats. Unfortunately, Ellie didn't ake it into the story, but soem of the other kids that we know that have benefitted from the stuff were featured. I guess that we aren't far enough along the road to being fixed.

It seems that a complication may be the company itself that doesn't like the way the doctors are using the product.

I hope that the limited information about the fat will convince the pharm folks at Fresenius to keep selling the Omegaven to us.

Just a little nerve wracking to think that we might have to go back to the stone age or search for another omega-3 source for her PN.

The activist side of me thinks that it would be a good fight to take on the drug company. Imagine the news story of 30 sick yellow babies coming from the transplant unit to ask the billion dollar company to let them live. ....

I'd prefer that it doesn't get to that and that the company keeps selling its drug.

Posted by Gib and Abby Brogan at 6:19 PM

The FDA will never be the same if Abby Brogan has to call a meeting there.

Do we need to write letters?

This baby truly is one of the sweetest lookin' girls I've ever seen. Just beautiful.

Hey kids,
Haven't talked in a while. I sure hope they keep giving the necessary drugs. Anyway, the halloween pictures were priceless, she is so cute. Hope all is going well there, and let me know if you need anything. Looks like I am moving back to the East Coast (Maryland) around the beginning of the year, so at some point I will get up to visit. Take care.
Dan