Let me give you a brief summary of what got us here to this point, a whirlwind few days.

My wife Abby was due to deliver our first baby (we didn't ask about the sex to be fun and piss off my mom) on May 9th. On april 7 she had her regularly scheduled ob appt and it went just fine and we booked an appt for a week later. Well, the ob mst have ht the magic button because she went into labor at 1 the next morning and by 10 we were firmly in place in the Westerly, RI hospital for the long haul. After 24 hours of labor, Abby went in for a routine c-section (if surgery is ever routine) and at 1:45 AM on Sunday, March 9 we met our baby girl (Abby was ure that it was a boy and even asked us to double check the gender when she was delivered). After being cleaned up, wrapped up, and Abby got sewed up, we had a bundle of baby to contemplate and figure out as we sat in our hospital room and even had a chance to get my parents out of the waiting room at 2:15 in the morning (my Dad was a stiff sore guy by then) to come in and see Eleanor 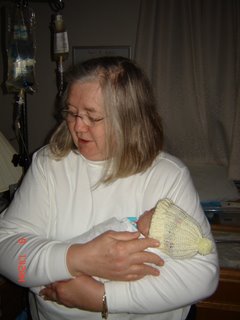 We were bewildered about what to do with this baby and concerned that she wasn't crying, wasn't giving us hell or, for that matter, wasn't looking like she was breathing all that much. We even asked the nurse how to tell if she was breathing and she showed us some techniques to stimulate Eleanor to yawmn, wiggle or twitch to show us that she was okay.

We found out soon after this why she was being so quiet when she threw up first on me and then in her bassinet. We are not talking baout baby throw up but thick greem stuff that just was plain old scary. The first time that it happened, I was holding her and ran down the hallway with Ellie in my hands saying to myself 'don't drop the baby, don't drop the baby...' The nurses vacuumed out her stomach and sent her back to our room, telling me that it was most likely muconium (sp?) that she had swallowed in the womb. The second time the nurse knew that something was wrong and took Eleanor from our room to the small nursery in the maternity ward where the kept her over the night.

In the morning we were awakened by our obsttrician a short three hours after we last saw him. He briefed us on a few possibilities that could cause this and that most likely, eleanor would need to go to a more advanced hospital for further care, either Providence or New Haven's Yale hospital as soon as they could arrange for her to be transported to one of these hospitals.

At 10 AM the crackerjack team from Yale arrived with their specially equipped super baby transporting van and off she went, packed up tight as could be in a portable incubator.

Let me tell you that seeing your new little girl packed up for shipping in a box that I have only seen in E.T. was more than I could handle. we were supposed to be lounging in the maternity ward, fumbling over how to change a diaper and me getting it on backwards. Instead our little girl was on board with the superfriends for points west.
Posted by Gib and Abby Brogan at 10:33 PM