An end of cisapride

Ellie's EKG last week showed some abnormalities in her heart beat that concerned her GI doctor and the cardiologists here at Childrens. Specifically, the time between different parts of her heartbeat electrical signal (the Q and the T) was longer on cisparide than off of it, the reason that the drug was recalled a few years ago. 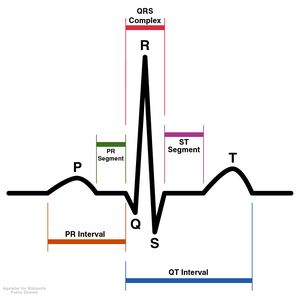 If this continues, Ellie could have an arrhythmia which could be very bad for her.

On Saturday we stopped her cisapride and waited until Monday for a second opinion from the cardiology team.

Yesterday we got word that Ellie's heartbeat was in fact elongated and we decided with her doctors to stop the drug despite its possible benefits to her digestion. Our thought was a baby with short gut is bad but if she had heart problems, the short gut would seem like a bug bite.

Furtunately, the information that we have says that her QT interval will return to normal fairly soon.

So now we are assessing our options for the next step and will meet with her doctors in the next few days to start planning for phase IV of her treatment, most likely another surgery to bring her small bowel up to the surface in an ostomy which hopefully will allow her bowel to come back down to a functional size.

I never thought that I would look forward to taking care of an ostomy.

It will be difficult for a while as we deal with changes in fluids and other complications from the ostomy, but we are confident that this is a good step for her.

Meanwhile, Ellie just keeps dancing for us with her fancy legs: 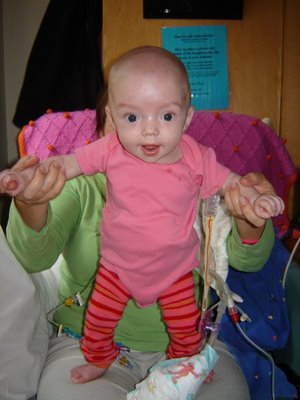 Posted by Gib and Abby Brogan at 1:34 PM

Bring on the ostomy!

I'm so sorry the cisapride didn't work for Ellie the way everyone had hoped. I hope that things go well the next few weeks. LOVE the pictures of active happy Ellie and striped leggings!