Let's hear it for Craigslist!!

Ove the weekend, Abby and I spent a long time looking for leads for apartments an found a disturbingly small number of very expensive, very small very crappy apartments and an even smaller number that would take Gus the Wonderdog. We made appointments for late this afternoon and saw three this evening that looked to be at the top of the small heap of affordable apartments where I would feel okay sending Abby home alone at night.

Moving back into an apartment was not high on list and we hoped to find something different that wouldn't share walls with noisy neighbors and their late night calisthenics or stinky cooking. Why is it that your cooking is aromatic and theirs is stinky? I don't know but it is the thing that I hate most about living in an apartment.

The late night aerobics can be kind of entertaining....

The first place was just awful. The top two floors of a run down victorian in Newton. It would have been something if we could do work on it, but as it was it was just yucko and smelled like someone had gone nutso with the Lysol to cover something up. No thank, not singing to either of us.

The next one was better. The top floor of a smaller house that was in good shape. Washer and dryer for barfy girl when she comes home, but a very seep set of stairs. We liked it so much that we offered the guy, who owns the building and lives downstairs, a check on the spot. He declined and told us that he was 'interviewing applicants for the apartment', not showing it.

Well I don't know if we met his standards, but hopefully we'll never know.

Number three was the ticket. We found a winterized cottage in posh Wellesley, next to the town pond for Gus to keep up on his swimming and for less than any of the other places.

A house! With no shared walls or stinky food.

It is little but great. Two bedrooms a new kitchen, and new floors all over. Hook ups for our washer and dryer. We gave the woman a check on the spot and hope that we will be cleared to move in mid month.

Five minutes from Abby's sister's house and closer to Children's. And a sun porch for Eleanor's naps: 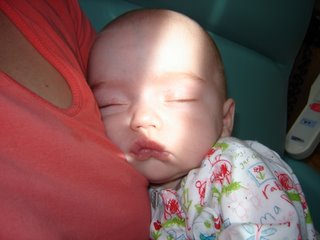 Finally, a place for my stuff.
Posted by Gib and Abby Brogan at 10:07 PM

that's so cool about the house! i can't wait to come visit sometime, feel free to email me anytime at petter_a@denison.edu. you may be getting an email soon just for fun

Hi Abby and Gib, your house sounds perfect for you all! Ellie looks so cute when she is sleeping. Hope you guys are getting some sleep too!

Oh Brogans Congratulations on finding a little place to call your own - that is just fantastic. I know within weeks of being in it will get your personal touches and feel more comfortable at night to come home to.

Yay!! Can't wait to see the new digs when I come home to visit. Glad you found a new place to call home. Miss you!!

Jess said...
This comment has been removed by a blog administrator.
10:00 AM

Great news. Can we paint and fix up a nursery for the princess?

I'm pretty sure that if you live in Wellesley, her room has to be pink and green.

If you have work to do on the new house, call the friggin' Aprils right away.

I can tell from the pictures that Ellie has grown since I saw her last week.

Looking forward to a day with the girls today.

Great news! I am excited to hear that you found something great. Can't wait to see it.