No news..Is not always good news.

Again, we have to apologize for not posting earlier.
We used to say that when it came to us, no news means good news. However, in the age of reconnected Ellie, this just doesn't seem to be the case. The reason we haven't posted is because we haven't had a clue what was going on and with everything in such relative chaos, we didn't have any clear ideas to report or the energy to report them.
We have known that after Ellie's reconnection surgery in May we would be looking at a completely different girl and everything we knew about her bowels would go out the window.
Oh, how right we were.
We had weeks of Ellie eating anything and everything we put in front of her, with great poops and weight gain. Then, all the sudden, we would get vomiting, and intolerance of all foods. This continued all summer; 1 week bad, 1 week good, 1 week only okay. We also recently started to see a new bloated and distended belly-she started looking and feeling like she swallowed half of a small watermelon.
Following what we know about short gut and given the time that had elapsed since her surgery we started thinking Short Bowel Bacterial Overgrowth (very common in short gut kids), stomach bugs, C-Diff, and allergies. So we tried everything. Cycling antibiotics for overgrowth. Removing all solids, then reintroducing them very slowly. Limiting her diet, pushing her to eat and poop a bunch. We saw some signs of success and would join the Cipro fan club only to have her slide backwards.
Finally after a few recent rounds of barf-o-rama, we started thinking that something might be wrong with her plumbing- a bowel obstruction. Today we went in for her second Upper GI contrast study of the summer. We almost didn't do it since we ended up in the ER two days after the last one. They are very hard on her gut. But we are very glad we did.
3 Hours after the contrast was added to Ellie's belly through her G-tube, the contrast still had not moved from her small bowel to the colon. In the past we have seen this time be as short as 30 minutes.
Enter super Mom with Dr. Jennings on speed dial.
10 minutes later he was in the waiting room with us and explaining what he saw: obstruction or narrowing of the anastomosis(surgically created connection between small and large bowel).
This means that the food and fluids that have not been able to go down have been backing up in her small bowel, and wait for it..... dilating her small bowel.

Yes, this is the problem we have had for... um,..for.ever?
First when she was inpatient before the ostomy and then after when she had the ostomy and we were trying to get more stool to go down her colon.
So here we are again. Hopefully not back at the beginning but the view is eerily similar.

We head in tomorrow for a lower GI contrast study through a contrast enema (oooh!). If we still see this problem then we will probably be admitted to wait for a surgical spot to fix the narrowing. As we finished talking this afternoon Dr. Jennings was toying with idea of setting us up with enough IV hydration fluids to compensate for the lack of any food or liquid going through her gut and letting us go home for the weekend and then come back on Monday for admission and sugery. We can hydrate her here as well as in the hospital so if a surgical apot isn't open until Monday that sounds like a great option. Ellie does best at home and biding our time in the hospital with a happy girl is tough duty.

All this does mean that Ellie is off of all solid foods. She can have small amounts of clears but not much as most everything is backing up. Not really that easy but I think she has been feeling pretty yucky over the past few days and this will make her feel better. Looking back at the summer, this would explain almost all the problems we have so far.

After Dr. Jennings left Gib and I were pretty sad. The idea of another surgery, and hospital stay is not something we look forward to. But on the flip side, it is an answer to a question that has been beating us up all summer. Now we know what was happening and hopefully we know how to fix it. Hopefully. 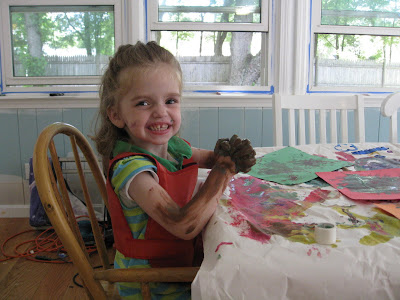 So now that I have said all that. I must say that Ellie has been great through this all. She always amazes me with her strength. She has been happy and up to all her old tricks through it all. She hasn't had the energy that she used to and hasn't ridden her bike as much as she used to, but we have still had fun.
Here are some fun pictures of Ellie at Abby's sister's pool yesterday. Just before the latest barf episode that drove us to get today's tests : 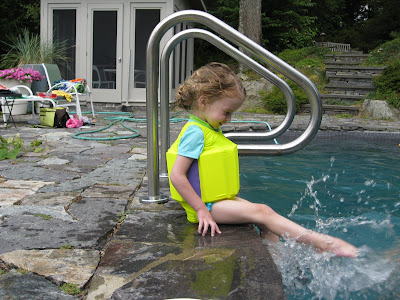 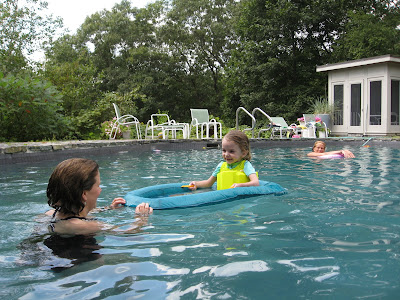 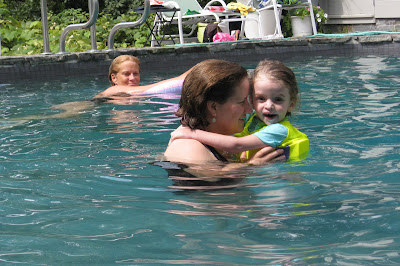 Posted by Gib and Abby Brogan at 9:30 PM

Yikes guys. I'm sorry to read this- but a "good job" is still in order since your instincts being right on.

We'll be wandering through CHB tomorrow again too (we were there today as well); maybe we'll see you around :)

There are no publishable words to describe my thoughts. You three are amazing and strong. You are in the best hospital with the best doctor so hang in there and get our girl ready for preschool! Grampa and I will see you soon.

I knew it had been too quiet. I'm thinking of you and your delightful, amazing girl. You're an amazing team.
When she's ready for a visit from Cookie, let me know!