A new schedule for the Ellie Brogan local

The results of Ellie's GI series are encouraging for us. Three weeks ago it took 6 hours for the barium dye to go from her stomach to her colon (normal is about 2 hours).

The GI series that we did yesterday showed that it is now only taking 2 1/2 hours for the dye to go from top to bottom, an indication that Ellie's anastomosis (the bottle neck where her distended small bowel meets her smaller large bowel) is getting wider and allowing things to pass more easily. It is still slowed down as it moves and we aren't sure whether food wil act the same as barium dye, but it is encouraging for us.

The short bowel team meets tomorrow to discuss the patients in the program and we are anxious about what they have to say. We hope that after the bump in the road that has taken place over the past two days that we can resume feeding her tomorrow at the same slow rate that we had been doing up until the weekend.

Meanwhile Ellie sleeps the day away: 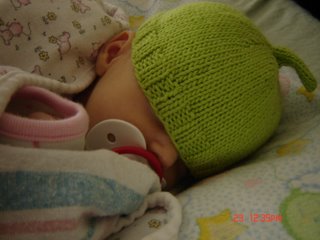 Posted by Gib and Abby Brogan at 5:39 PM

Ok, she is just wicked cute. I love the new photos--she's really looking so healthy and happy. Can't wait to see you all!