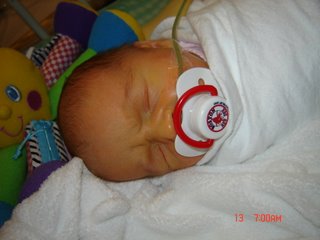 One of my favorite things to do while talking to Eleanor through the 'portholes' in her isolet (the tiny incubator/crib/bubble that babies live in while they are in the ealry stages of the NICU) is to tell her the latest news from the Red Sox game from the night before that I see only on a glimpse of sportsCenter each morning while we get ready to visit Ellie. I will also tell her my opinions on the controversies of the day-Pappelbon vs Foulke, Big Papi's new contract etc.

Well surprise surprise last night when one of Abby's friends from work arrived with a pacifier/plug/nuk/binky with a bright new Red Sox logo on it.

Well imagine my surprise when we wnet down to the NICU tonight to say goodnight(which lasted 2 1/2 hours) and the nurse had the new plug perched on Ellie's mouth and supported by a tiny stuffed animal.

"She loves that thing and gets fussy if it falls out of her mouth," the nurse told us, "propping it up is the only way to keep her happy."

So I guess here in the heart of the Yankees portion of CT we have a new tiny Sox fan, a fact that apparently has spread around the NICU and elicited some comments from doctors we don't even know as we walked in tonight who joked that they don't treat babies who root for the Sox.
The rivalry even extends into the Neo-Natal world. Imagine that.
Posted by Gib and Abby Brogan at 11:01 PM

Dear Ellie, Gib, and Abby: Love the Red Sox story! You are all beautiful and I love you. All good thoughts to you and a "two-boober" hug. Barbara